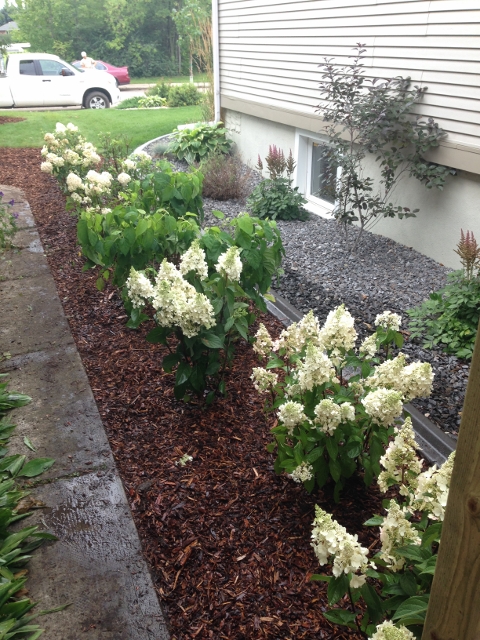 I never paid much attention to hydrangea until the last couple of years.  It isn’t commonly planted and I don’t often see really nice specimens in the yards I work in.  All that changed a few years ago when I saw the most incredible ‘Annabelle’ hydrangeas growing in a protected back yard picking up filtered late day south and west exposure.  The white blooms were as big as I’ve ever seen and the plant made a stunning addition to the small patio garden.  Since then, I’ve been planting them in a variety of situations and exposures, using a number of cultivars.  We like ‘Pinky Winky’ and frequently use it in our designs, as it seems to be the most durable cultivar, and has unusual, pinkish, lilac-like blossoms.  My 4-year old daughter thinks they’re all nice.  Just make sure when you are selecting a cultivar at the garden centre, that the plant is Zone 3.  I’ve seen many Zone 4 varieties sold locally, and these will not make it.

East seems best.  If planted on the south or west sides, they will need to be protected by the shade of other plants or structures.

I have consistently noticed that hydrangea suffers transplant shock, especially the ‘Annabelle’ cultivar. They wilt shortly after planting and will require frequent watering until the roots establish.  Even covered with a fine wood chip mulch, I had to water my new hydrangeas (see photo) almost every day.  I’ve also received panicked phone calls from customers after we plant their hydrangeas, and I assure them if they water them well, they will be ok.  Plant in moist, well-drained soil.

Hydrangeas respond well to hard pruning in many climates, but I am reluctant to prune them too aggressively here in Alberta, at least until the roots are well established.  After planting the first year, I dead-headed the flowers in fall back to a set of fat, healthy-looking buds and I removed messy crossing and rubbing branches from the interior of the plant. 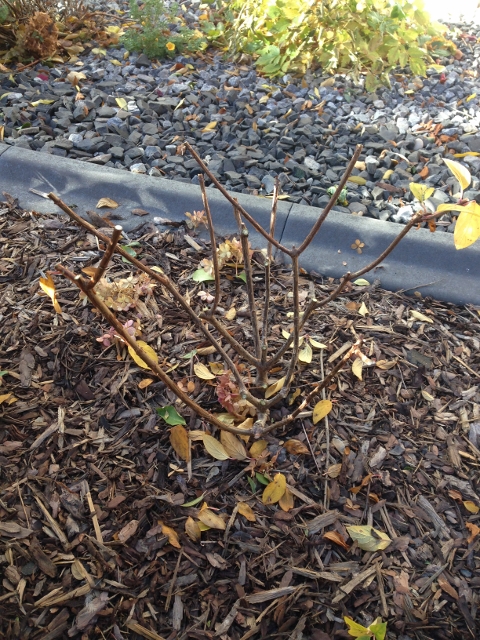 Pruned to a framework, similar to rose pruning, in late October of the second year. S. LePage photo.

After the second growing season, I cut the hydrangeas back hard to a well-spaced framework of branches, removing dead and crossing/rubbing limbs.  The idea of hard pruning is to produce fewer, but larger flowers.  It also has the added benefit of keeping the shrubs tidy, and preventing tangled, overgrown specimens.