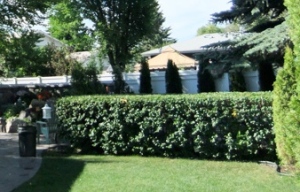 What would we do without the ubiquitous cotoneaster? It makes a great hedge with lively fall colour, and an interesting specimen plant for a corner of the shrub bed. The waxy leaves and tightly branching growth habit provide excellent plant material for hedging and shaping.

Dormancy is ideal for hard pruning due to the size and number of wounds. Lightly trim the hedge to a desired shape with manual shears in late June once the growth flush is complete. Use manual hedge shears for a much cleaner and more precise cut. Power hedge trimmers tear branches rather than cutting them, which leaves to jagged cuts, potential die-back, and brown branch tips.

I prune cotoneaster specimen plants in the same manner as nanking cherry, sour cherry, and even lilacs. Remove obvious deadwood as well as crossing and rubbing branches. Untrimmed, the branches tend to cascade nicely. If you prefer a formal look, you can shear the plant, as you would a hedge, into the desired shape.

Cotoneaster is prone to a variety of insect and disease problems such as aphids, oystershell scale, fireblight, and powdery mildew, just to name a few.

Oystershell scale is becoming an increasing problem in the Calgary area, with entire hedges completely infested with the insects. Cotoneaster seems to be the preferred host, although oystershell scale will attack up to 120 different woody species, including lilac, crabapple, green ash, and many others.

Monitor oystershell scale in mid-June by shaking some branches over a piece of black material. Scale has two life stages, the crawler stage and the adult. Oystershell crawlers are tiny and orange-coloured. It is at the crawler stage that the insects can be controlled. Once the crawlers become adults, they secrete a waxy coating that is impervious to insecticides.

Light infestations can be controlled with a two stage treatment with insecticidal soap, 10 days apart. I treat severe infestations with a contact insecticide.. It is advisable to call a licensed pest control applicator for chemical control, as they are properly trained in the safe use of such chemicals.

Old, overgrown, or diseased cotoneaster hedges can be renovated, during dormancy, to a few inches above grade. Healthy new growth will emerge and reach a height of about 2’ in the first growing season.

As with most plants, cotoneaster prefers moist, well-drained soil. It does not tolerate standing water and will die out within a couple of seasons if left in very wet soil. I like to provide a mulched area under the plant to protect the roots and retain soil moisture during extended hot weather.

Cotoneaster sometimes exhibits iron chlorosis, which is a yellowing of the leaves between the veins due to iron deficiency. This would most often be seen in high pH soils, where iron uptake is inhibited. Apply a low nitrogen fertilizer with iron in mid-May.